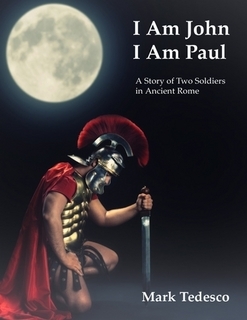 I Am John, I Am PaulÂ by Mark Tedesco follows the lives of two real-life Roman soldiers in the fourth century, Ioannes (John) Fulvius Marcus Romanus and Paulus.Â Â John and Paul form a strong bond of friendship during their days fighting on the German frontier, a bond that is never broken even when John is sent away to Alexandria by a sadistic centurion.

John spends years in Alexandria longing for home and corresponding with his family and Paul in Rome.Â Â While in Alexandria, John is initiated into the Mithraic religion, but his faith in Mithras doesnâ€™t seem to give him the peace he thought it would.

Political upheavals enable John to return to Rome, his family, and Paul.Â Â John and Paul resume their duties in the Legion, and even volunteer to rescue a close family member of Emperor Constantine, who was kidnapped by a rival Roman general.Â Â The mission succeeds, and the Emperor is so grateful that he gives them both farm lands and a house in Rome, ensuring they and their families will never again know poverty.

While in Rome, John and Paul discover the â€˜Way,â€™ the nascent Christian movement that threatens the old Roman gods.Â Â In the Way, John discovers the faith he always hoped would fill his heart, which strengthens both men when they suffer the inevitable persecution.

Iâ€™m a huge ancient Rome geek, so there were many things I liked about this book.

For one, it was well researched.Â Â The author knew his history and provided illuminating details of the lives of average ancient Romans.Â Â Tedesco had a clear understanding of Roman religions, including Roman pagan rituals, Mithraism, and the practices of the â€˜christus followers’.Â Â The book was beautifully written in a first-person narrative told primarily by John, with dialogue that had an ancient, almost biblical feel.

Now I offer the following as an observation and not a criticism, as it is more a warning about the bookâ€™s style.

I felt like I was reading Johnâ€™s personal journal.Â Â And like the journals of real-life people, you wonâ€™t find the standard fiction novel plot twists and character conflicts.Â Â For the most part, things justÂ happenedÂ to Johnâ€”he doesnâ€™t reallyÂ doÂ much (besides plan and execute the rescue mission, which was the best part of the book for me).Â Â Most of the conflict is internal, with John searching for spiritual meaning in Alexandria and Rome.Â Â Tension between characters was minimal.

In other words, read this book for the thoughtful writing about a man searching for his spiritual home, or to experience the lives of everyday Romans during the fourth century.Â  But skip it if youâ€™re seeking a page-turning adventure story set on an ancient Roman battlefield.

I Am John, I Am PaulÂ is available on Amazon.