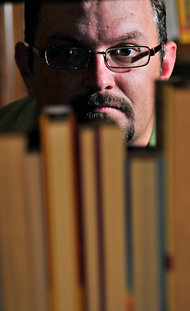 The New York Times has a story on the rise and fall of GettingBookReviews.com, a service owned by Todd Rutherford where, for a fee, authors could commission several dozen 5-star reviews and get them posted on Amazon and other online markets.

“I was creating reviews that pointed out the positive things, not the negative things,” Mr. Rutherford said. “These were marketing reviews, not editorial reviews.”

In essence, they were blurbs, the little puffs on the backs of books in the old days, when all books were physical objects and sold in stores. No one took blurbs very seriously, but books looked naked without them.

One of Mr. Rutherford’s clients, who confidently commissioned hundreds of reviews and didn’t even require them to be favorable, subsequently became a best seller. This is proof, Mr. Rutherford said, that his notion was correct. Attention, despite being contrived, draws more attention.

The system is enough to make you a little skeptical, which is where Mr. Rutherford finds himself. He is now suspicious of all online reviews — of books or anything else. “When there are 20 positive and one negative, I’m going to go with the negative,” he said. “I’m jaded.”

GettingBookReviews.com went out of business in 2011 due largely to Google suspending its advertising account, and Amazon removing most of its reviews from their site.